Liberians are impatient for the change they voted for. The bread and butter issues continue to bite hard to the bone. President George Weah - elected largely by the youth on the Euphoria of change is yet struggling to grapple with the realities of political governance. It was never going to be easy for Weah (a football legend), to navigate the troubled political and socio-economic terrain of Liberia especially given the fact that Ellen Johnson Sirleaf, with her vast experience in economic management and international diplomacy, fell short of her own promises to bring economic and social transformation to Liberia. George on the other hand with limited experience in governance has been entrusted by the people to transform their lives and the fortunes of their beloved Liberia. A tough call.

It is extremely important that a critical analysis of Leadership from Ellen Johnson Sirleaf to George Weah is done to situate some of the current challenges in their right perspective and proffer solutions and suggestions to how Liberians should be thinking about future governance. During the first term of Ellen Sirleaf, (2006 -2012), substantial accomplishments were achieved given the disastrous state of the nation just coming out of a serious war. Check the links at the bottom of this write up for more on Ellen’s presidential accomplishments.

This write up seeks to highlight the modest accomplishments and challenges from the Ellen to George Weah era, the hopes, aspirations and frustrations of the Liberian people in their Leadership, the way forward and the lessons for governance in Africa.

The challenges Ellen – Johnson Sirleaf Inherited upon taking office in 2005.

Challenges, Failures and disappointments of The Ellen Johnson Sirleaf Era

“In fact it ranked 177 out of 180 countries in the Human Development Index. Part of this is [due to the lack of] capacity to implement policy. If you are looking at an immediate post-conflict environment, it can be difficult and complex to do the work of rebuilding the country, consolidating peace and sustaining a transition towards democracy all at the same time.” Elizabeth Donnelly, deputy head of the Africa Program at Chatham House in London.

The Way forward and Expectations from the Weah led Administration

Lessons for Governance in Africa

The links below will give additional information in detail that this write up does not cover on Governance. 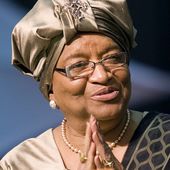 The Economy, peace & security,social infrastructure,good governance under the spotlight In 2005, liberians elected the "Iron Lady" madam Ellen Johnson Sirleaf for a 6 year presidential term to ...

Opinion - Her Excellency Ellen Johnson Sirleaf's performance as President has left an enduring legacy, both tangible and intangible. I set out to appreciate her contributions at the end of her ... If Liberia was a company; let's say a multinational entity with thousands of people to pay every month, give the strategic direction for its future, do its corporate social responsibility and make ... After 12 years, Nobel Peace Prize Laureate and Africa's first female president, Ellen Johnson Sirleaf, is ready to hand over power. When she first elected in 2005, many in Liberia and the ... In 2006, Ellen Johnson Sirleaf took the oath of office as President of Liberia, the first woman to serve as elected leader of an African nation. Her victory was the culmination of a 25-year campaign